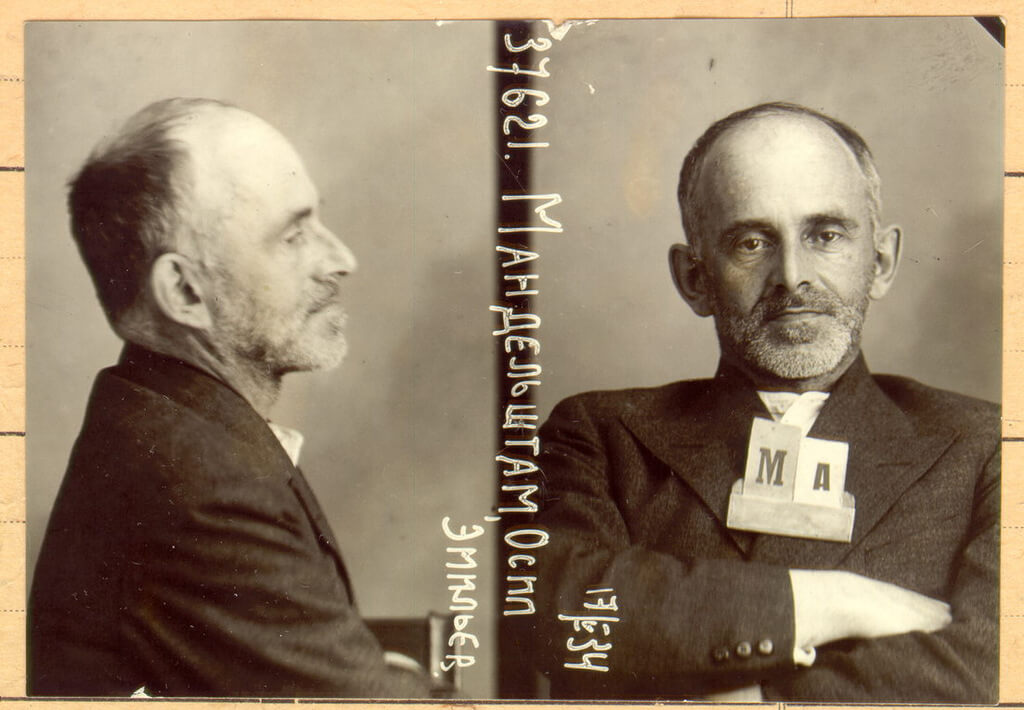 HOW MUCH CAN YOU BEAR? THE CASE OF OSIP MANDELSTAM

by Richard B. Grose

The publication of Diane Seuss’s poem, “Still Life with Dictator“, in this issue of ROOM made me think of another poem about another dictator which appeared in circumstances very different from these. I refer to the poem on Stalin which was composed and read in a small circle by the Russian poet Osip Mandelstam (1891-1938) in Moscow in November 1933.

In the fall of 1933 the Soviet Union had experienced five years of tremendous social convulsion wrought by the Soviet Government in implementing the first five-year plan. With no preparation or concern for the consequences, every sector of the economy was industrialized, the peasants in their many tens of millions were forced onto collective farms, the arts and media were expected to confine themselves to celebrating these changes, and in place of the collective leadership prior to 1928, everyone was now expected to express a deep love and admiration for Joseph Stalin as the demiurge of the changes.

These forced changes brought terrible suffering. Collectivization ruined harvests and people starved. Furious peasants sabotaged their farms. A whole section of the country, the Ukraine, was deliberately deprived of grain in 1932 for political reasons, resulting in five million deaths or more. If you were alive in the Soviet Union in late 1933 you would have seen starving people everywhere even as you read in newspapers and novels about the glorious Communist future that was being built. Some believed what they read and thought no further; others saw with their own eyes what was happening. For the latter it could be an agonizing situation because the changes that created such terrible suffering were also being done in the name of the Revolution and the people, words which for many in the Russian intelligentsia still had great meaning. Mandelstam, who grew up in the last decade of czarist rule, was among these.

But he found he could not bear the suffering he witnessed and the mounting level of falsification and dishonesty that politics and culture were requiring. In November 1933 he could be silent no longer. He invited 11 people to his apartment who included his wife, some relatives, some good friends, and some acquaintances, to hear the following poem about Stalin.

We live, deaf to the land beneath us,
Ten steps away no one hears our speeches,
All we hear is the Kremlin mountaineer,
The murderer and peasant-slayer.
His fingers are fat as grubs
And the words, final as lead weights, fall from his lips,
His cockroach whiskers leer
And his boot tops gleam.

Around him, a rabble of thin-necked leaders –
fawning half-men for him to play with.
They whinny, purr or whine
As he prates and points a finger,
One by one forging his laws, to be flung
Like horseshoes at the head, to the eye or the groin.
And every killing is a treat
For the broad-chested Ossete.

In 1933 it was already impossible to publish such a poem, and Mandelstam knew that if the poem came to the attention of OGPU, the secret police of the time, the punishment would be severe. His act of protest, therefore, was less in writing the poem than it was in reading it in a circle that was made up not only of relatives but also of people who were not so close. There are at least two ways of viewing this act. It can be seen as heroic, a poet’s defiant assertion of his freedom as more precious than his life. It can also be seen as suicidal. The fact that some people present did not know everyone else well enough to be sure that not one of them would denounce the poet made the pressure great to be the first to denounce lest someone else be first and they then be viewed as a co-conspirator. Thus Mandelstam knowingly made himself the canary in the coal mine, to see how bad things had become.

He found out. Four months later he was arrested and subjected to an interrogation that made him temporarily psychotic. He and his wife were then exiled to a small city in the south of Russia, where they lived for three years. Mandelstam was re-arrested in May, 1938, during the Great Terror, and died in a Siberian transit camp in December of that year. He has no grave.

The Soviet Union in 1933 was a society well on its way to becoming totalitarian. Indeed one of the many changes in the country since 1928 had been the idea that any deviation from the expected admiration for Comrade Stalin was tantamount to counterrevolution and therefore punishable by death.

Today the head of the American government has given overwhelming evidence that he would like to rule as a dictator. He would like to receive as much praise and admiration as Stalin did. What our leader does not have in February, 2018, is a society and a historical situation which could allow him to expect universal praise. As we move into the future with our would-be dictator, one parallel with the Soviet situation jumps out. Stalin plunged his country into chaos in part because to have allowed the then existing economic and social freedoms to continue would have threatened the very idea of the Revolution, i.e., the “glorious Communist future” that it was supposed to bring about. Creating terrible suffering was preferable to endangering the idea in the name of which they had taken power.

The Republican Party under Donald Trump seems to be in a somewhat similar situation. The conservative and libertarian philosophy on which Republicans have run and been elected says that we’re all better off if the government is reduced. It is reported that the Republicans are considering drastic cuts in government provisions, which if enacted would create great suffering. Will they have as much stomach as the Soviets did for causing great suffering in order to preserve their ideology? Will American institutions function well enough to avoid that suffering?