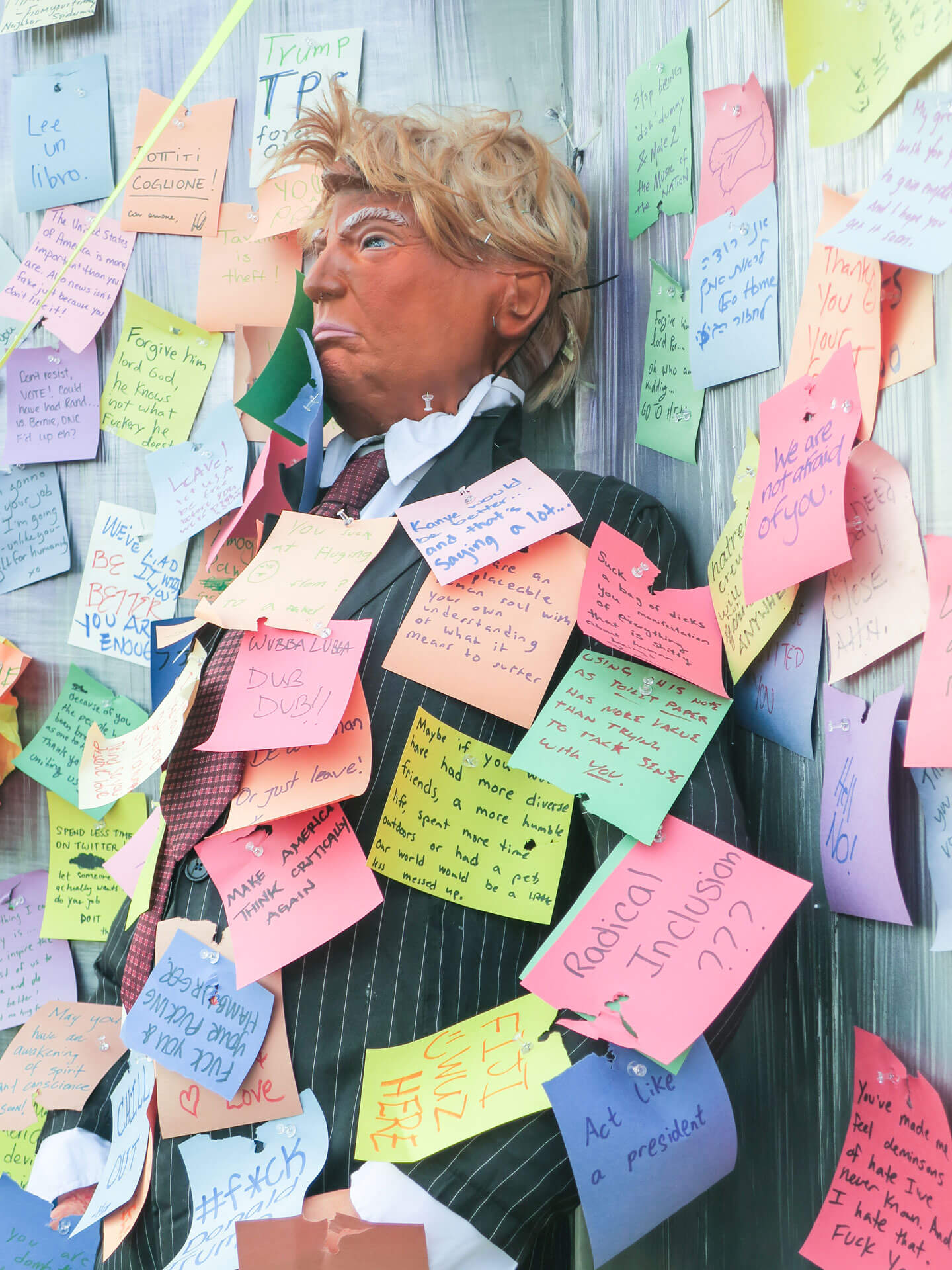 THE META-MESSAGE IN TRUMP’S TWEETS

In addition to the political controversies that they ignite, the contents of presidential tweets are subject to diverse statistical analyses as evidenced by postings on the internet. As a form of do- it-yourself proof, empirically minded tweet investigators offer downloadable data sets and computer code. A public archive (http://trumptwitterarchive.com) containing tens of thousands of time-stamped Trump Tweets (TTs) is available. There, an obsessive bot monitoring the presidential Twitter account updates the archive minute by minute.

As a result of linguistic and sensitivity analyses, we know that in terms of emotional content, TTs are most frequently classified as “negative” or as “attacks.” Statistically, Trump’s attacks on people and institutions most often focus on: 1) weakness (“lightweight,” “loser,” “poor,” “pathetic,” “weak”), 2) stupidity (“incompetent,” “moron,” “clueless”), 3) failures (“failing,” “failed,” “disaster”), 4) illegitimacy (“fake,” “false,” “hoax,” “witch hunt,” “unfair,” “discredited”), and 5) corruption (“crooked,” “liar”, “dishonest,” “illegal”). His all-time favorite word is “great” (some studies find that he uses “great” more often than his next several favorite words combined). His favorite insult is “fake.” His favorite pronoun, “I.”

Some investigators suggest that there are two distinct sources of TTs. The first group, a small minority of all TTs, are believed to be authored and posted by staff on behalf of the president. These tweets are noteworthy for their use of complete sentences, appropriate capitalization, minimum exclamation points, and logical coherence. They are frequently sent from an iPad or iPhone.

The second and major source, believed to be directly authored and posted by President Trump, typically come from an Android device. These tweets are characterized by incomplete sentences, recurrent single words or short phrases (e.g., “sad,” “bad,” “witch hunt,” “fake news,” “no collusion”), simplistic language, random capitalization, all-caps words, misspellings, and bursts of exclamation points. Although a few suggest that the poor grammar, spelling errors, word misusages, and chaotic logic are a deliberate artifice intended to identify the president with his base, others point to rapid corrections of the worst mistakes or inadvertently humorous wordings as evidence that the errors are unintentional (e.g., the famously viral “unpresidented” tweet of 12/17/16 was corrected within 90 minutes).

The president tweets at all hours, but statistically he is most active between 1:00 p.m. to 4:00 p.m. and again around 8:00 p.m. to 9:00 p.m. Monday through Friday, he keeps up a steady barrage, peaking about midweek on average. On weekends, the tweet count falls, typically to about a quarter of an average weekday. However, some of his most virulent “tweetstorms” occur around weekends.

Trump’s tweets and tweetstorms have been subjected to numerous content analyses, usually in relation to events believed to have triggered them. Their longer term trajectory, however, has received less attention. A February 19 New York Times article1 with accompanying graphics2 revealed disturbing trends in the escalating pattern of TTs attacking the Russia investigation and associated individuals.

TTs reflect not only the president’s opinions; they also reflect his state of mind at the time they were composed and posted. I have not found good descriptions of presidential demeanor during a tweetstorm. Indeed, some discussions propose that his tweetstorms occur most frequently while alone and unfettered by staff. Thus, in addition to their content and organization, one must draw on examples of Trump’s demeanor in roughly analogous circumstances to inform inferences about his state of mind during tweetstorms (see below).

By “state of mind” I mean a recurring, discrete, cognitive, emotional, and physiological condition of being in which an individual perceives, thinks, responds, and relates in a distinctive manner for a finite period. Frequent observers often have shorthand ways to describe a person’s recurring problematic states of mind — e.g., “he’s having another one of his hissy fits.”

The power of certain states of mind to profoundly shape an individual’s salient associations and responses to sensitive stimuli or emotive contexts is most apparent when the person’s state of mind is extreme, e.g., blind rage, or is suddenly radically different from an immediately preceding state of mind, e.g., a sudden-onset panic attack. But waking, sleeping, working, playing, loving, or even comatose, we are always in some state of mind.

Typically, mental states cycle naturally in accordance with daily tasks and familiar contexts influencing how we think, feel, and act largely out of our awareness. It is only when the “normal” flow of mental states is derailed that we witness how painful, dysfunctional, hyperemotional, or traumatic states of mind (e.g., deep depression, explosive anger, traumatic grief, blind terror) globally influence perception, thinking, and behavior.

A key feature of discrete states of mind is their “state-dependency”( i.e., the selective compartmentalization of memories, cognitive associations, specific affects, and distinctive behaviors associated with a particular mental state). In general, the more extreme the mental state, the more complete the degree of cognitive, emotional, and behavioral compartmentalization. The more frequently a certain mental state reoccurs, the more easily it is re-elicited by situations and cues reminiscent of past triggers. In the same way that repeated bouts of bipolar mood swings progressively sensitize or “kindle” an individual reducing the threshold for future episodes, recurring tweetstorm increase the likelihood of more frequent and more intense tweetstorms in response to ever lower thresholds of provocation.

Although presidential states of mind and demeanor during tweetstorms are not well documented, an analogous venue of presidential mass communication, rallies, and speeches is observable. In both venues, Trump’s intended audiences include the same people.

Trump’s two-plus-hour speech to the Conservative Political Action Conference (CPAC) (3/2/2019) is an example of tweet-related presidential states of mind on display. The single longest presidential speech of modern times, it was described by commentators as “bizarre,” “unhinged,” “crazy,” and evidence that he was not psychologically fit for office. Noting earlier in the speech that he was going “totally off script,” Trump shows a glimmer of insight observing later, “I’m going to regret this speech.”

The CPAC speech largely reprises the collective content of TTs, reaching all the way back to inaugural crowd size. The live audience’s boisterous appreciation of old tropes embedded in a fragmented, rambling, emotional narrative no doubt changed some of the psychological dynamics. But the reality distortion, ubiquitous outright lies, paranoia, threats, illogic, tangential leaps, inappropriate anecdotes, and dearth of empathy characteristic of presidential tweetstorms is also central to his live communications, reflecting similar states of mind.

Temporal analyses of TTs shows that over the past two years these disturbed states of mind are occurring ever more frequently.

So where does this go from here? What does 2019 hold? The two-year trends predict that the attacks and tweetstorms are going to continue to increase, probably even more rapidly than before. Research on predictors of psychological decompensation (often using violence as an outcome) finds that an accelerating pattern of emotional lability is a very concerning sign.4 There is good reason to believe that the stressors responsible for the 2018 surge in tweet attacks will only intensify, further compounded by new investigations that now threaten his family and business. Recently Trump tweeted his most overt threat of violence yet, implying that his supporters in the police, military, and Bikers for Trump could be “tough” on his foes (tweet was later deleted but is in the archive). This accelerating pattern of TTs traces an ominous psychological trajectory, one often associated with psychological decompensation and violence. The walls are closing in — what happens when Trump can’t take it any longer? ■