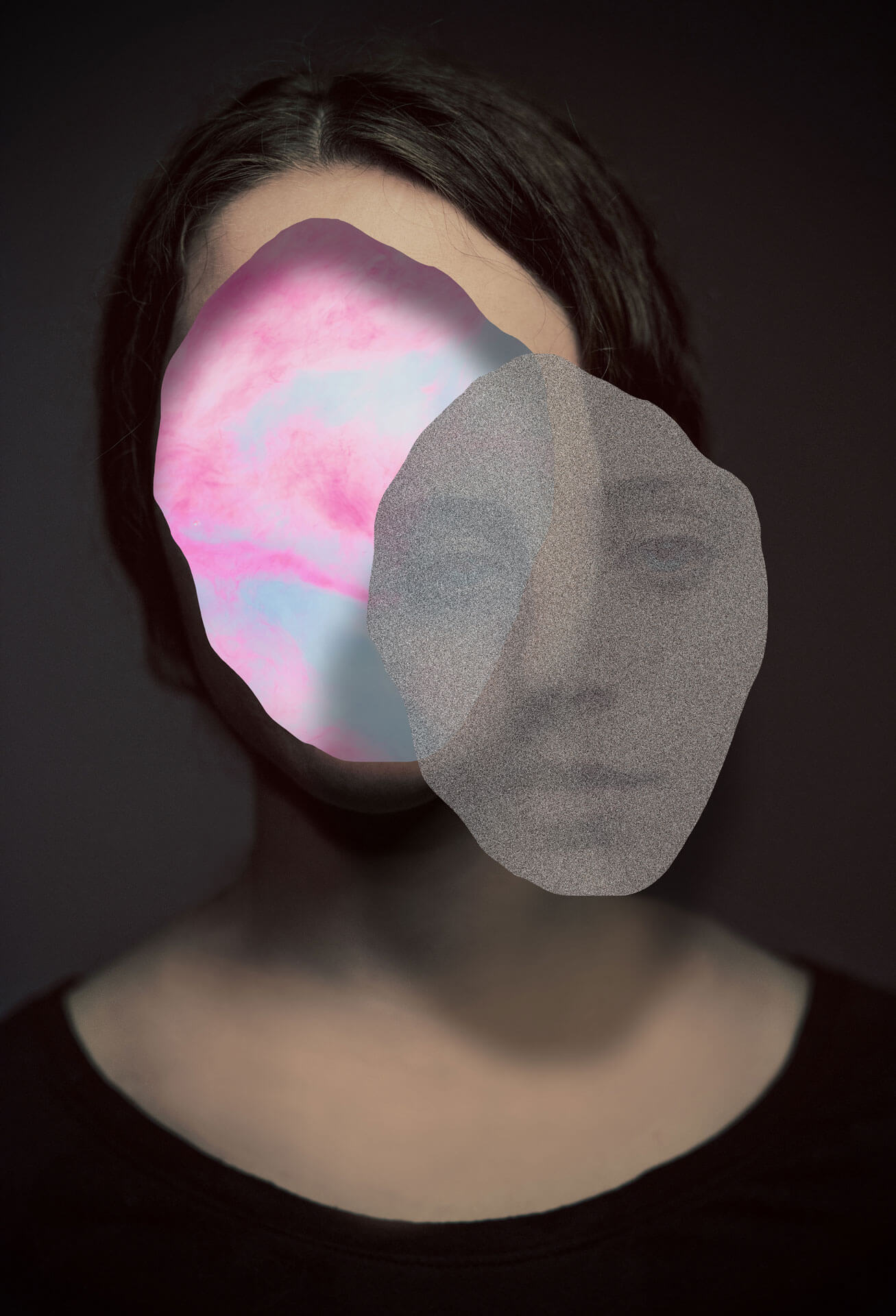 THE FEMINIST FUTURE IS NONBINARY

“I should comment on your appearance but I don’t have the time.”

I’m taken aback when Gloria Steinem, the “face of feminism,” announces on the Today show that she’s had “a little fat removed from above my eyes so I didn’t look like Mao Zedong.” Steinem is referring to the puffy-faced Chinese revolutionary who died in 1976, around the time when her model-thin figure was featured on a Manhattan billboard, erected by antagonists intent on reducing Steinem to her body.

With Steinem’s nod to Western capitalist culture, does she fear that the US feminist movement she’s represented will falter and become irrelevant if she shows her age? Or does she believe that talking openly about cosmetic surgery will make her more relatable to the masses? Backed by her so-called choice, her message is clear: masking serious acumen and political heft — “womanliness as a masquerade” (Riviere 1929) — is key to this feminist icon’s cultural viability. Steinem’s endorsement of a surgical lift — especially if it can “buy you twenty years in the public eye” — rattles me. As I step out my front door, I feel like I’ve lost a feminist compass. I’m instantly less confident in both my body and my feminist role model.

And then I consider how I’ve really been let down by Gloria Steinem. She insists that feminists grow more radical with age, and yet she’s been slow to embrace gender diversity. In a keynote address in 2015, Steinem erringly called attention to the “male privilege” of trans women who had lived at least part of their lives in their natal sexed bodies and assigned genders.

Steinem’s transphobic perspective, echoing one strand of a multivocal feminism (Enke 2018), rings of a violent, exclusionary historical politic that perceives trans women as interlopers; this view also entirely misses the cumulative gender trauma of nonrecognition. Terri Fierce, a black thirty-four-year-old trans woman I interviewed in New York City, explains, “For many years, not being seen by my mother left a void and I cried. I was depressed because I’m thinking, ‘I need my mother’s love and affection. But she can’t even see who I am. If she could just erase me, she would.’” Terri was clear about her gender identity before she was out of diapers but felt misunderstood by a society intent on coupling her genitals with her gender. “I knew that I was just a person who was assigned the wrong gender at birth. My body isn’t wrong. I wasn’t born in the wrong body. It’s just the labels put on my genitalia. Nobody should ask me if I was born a male, because I’ve always known who I am. I am female.” As a child, Terri was treated as a girly boy; she didn’t feel any sense of male privilege.

An aura of skepticism around gender creativity and transition highlights an enduring double standard: so long as a surgical intervention enhances a cisgender body, it is deemed normative and even superficial, but when a transgender subject is involved, the body is contested, the intervention is viewed as major, and the psyche undergoes scrutiny. Regarding transgender surgery, Steinem’s position that society’s conceptions of gender should change, not the actual body, expects trans women to shun body interventions or justify them as a cure for dysphoria, while cis women parade their invasive beauty practices as a form of self-improvement. Embracing femininity is not simply oppressive or trivial to cis or trans women, trans-bi writer Julia Serano (2013) asserts, but can be a vital part of self-expression. A surgical transition can be an essential, therapeutic, even corrective and life-saving medical intervention. It can also afford necessary protection against violence perpetrated on transgender and gender nonbinary people.

What is considered feminine is so restrictive for everyone, but when people are staring at your big hands or facial hair—and assume those are male traits—you learn to be “on point.” To be a woman is expensive, because you’ve got the makeup, the clothes, the hair and nails, the boobs. I’ve got to look feminine all the time because trans women are getting murdered. I’m really unhappy with people who are half stepping, meaning if you are not going to go all the way in your grooming, then don’t go halfway, because society is always looking. It’s a full-time job dealing with the harassment of people trying to sort me.

A transfeminist lens prompts critical questions, such as how do any of us explore our multigendered selves in a climate hostile to gender-nonconforming bodies? What’s required emotionally to step outside of a gender binary, to uglify as well as to beautify, to subvert rather than comply with restrictive categories and gender expectations? How do the politics of access influence surgical consumption? Whose business are the emotional outcomes of body-altering pursuits, and is happiness even the point? (Chu 2018) If a fuller spectrum of gender expressions, queer embodiments, illegible identities, and body sizes were recognized as legitimate, how might conceptions of cosmetic surgery — and beauty — change?

Many of my fortysomething cisgender contemporaries don’t question any part of elective surgery. On the hunt for Botox bargains, they regard negativity about cosmetic surgery as crunchy, and the idea of growing old gracefully and with wrinkles as old-fashioned, if not an oxymoron. They’ve adopted a brand of female empowerment endorsed by the perennially young actress Susan Sarandon who, in 2016, a decade after she had eye work done, shared her thoughts on cosmetic surgery: “I think women should do whatever they want to do.” With these peers, I feel clear boundaries around choices and a total freedom from judgment, as though each of us is only responsible for our own neoliberal selves and not each other. Choice and self-determination around reproduction and parenting, careers, gender identity, and body interventions are regarded as inherited rights. They fight for financial independence and fierce autonomy, but their stylized bodies convey a spirit of conformity with bourgeois society, uncritical as they are to intersecting systems of white, cis, and economic privilege. (Layton 2004)

Maggie Collins is one of these peers who welcomed me on her makeover journey. At dinner one night, I notice bright red marks across the tops of Maggie’s delicate hands, the effect of intentional burning by a laser that will “rejuvenate” her hands, she tells me. When I’m with Maggie, I do not dwell comfortably in my own skin. I feel far more aware of my physical imperfections and the interventions available to me for “fixing” them. She is what Andi Zeisler (2016) calls a “marketplace feminist,” someone invested in the illusion of free choice, who seeks individual solutions to personal uplift, often in the form of purchases.

On a recent crisp day, as I study the fine wrinkles on the sunlit face of my sixty-eight-year-old friend, I feel a sort of calm inspiration to do nothing, to grieve losses and disappointments, and to accept my declining body. I appreciate that living from within my body and the expansiveness of my gender are achievements that can shift sharply depending on the face I’m peering into. My feminist elders’ objections to cosmetic surgery are not only deeply held beliefs from within; they feel obligated to one another to protest elective self-cuts, which they see as an extreme point on a continuum of social control and gendered violence. The potential for social transformation, in their view, is contingent on feminist solidarity — not on individual empowerment through bodywork. This generation of feminism, however, is stymied to the extent that it does not fully support change and transition, including the trans movement.

Feminism is not a blueprint for personal conduct, Susan Bordo (2009) cautions. The old, prized standard of “authenticity” no longer distinguishes feminists from nonfeminists; minds are not isolated, biology is not sacrosanct, and the culture always seeps in. I won’t be donning Katy Perry’s pink stilettos, even if they were named after Hillary Clinton, but I applaud feminism’s aesthetic range. If a movement for gender parity evolves so that it is not a crumbling empire, like communism in China, feminists need to be freed from a police state of body monitoring. Patriarchy is perpetuated by divisions among people who most need social change, after all.

And feminists need to move beyond a totalizing perspective of women as a class denied inherent rights and subjectivity and get behind an intersectional agenda that is less invested in the category of woman and instead foregrounds justice for the people most oppressed by white supremacy: poor, gay, trans, and gender nonconforming people of color. The trans movement threatens the cis woman’s claim of gender oppression, built on the fight against patriarchy, which rests on a binary assumption, whose corollary is the so-called matriarch.

As nationalism lurks, the insistence on “pure” gendered bathrooms has as much to do with the projection of despised or feared parts of oneself onto the hated other as it does with the deep insecurity and identity crisis fostered by the disposability of not only older women with wrinkles, but of anyone who has failed at the American Dream and feels displaced. The virtue of purity — whether regarding sex, gender, or a body untouched by cosmetic surgery — is accepted as anachronistic outside of biological determinism, and yet this moralism still undergirds feminist attacks and defenses. An embrace of multiplicity, contradiction, flexibility, and curiosity, more than a striving for commonality, requires a tolerance for anxieties that any of us is bound to encounter when we dig deep within our own raced, classed, gendered complexities and interface with an other, whether a Gloria, a Terri, or a Maggie.

After I absorb the initial punch I felt at Gloria’s disclosure of cosmetic surgery, I appreciate that cosmetic compliance does not preclude fighting against transphobia and gender hierarchies. Modern-day feminists insist that how we live in our bodies and experience gender is as idiosyncratic as it is political. (Stryker, 2017) Decades ago, trans pioneer Sandy Stone referred to the engaged life as one marked by continual transformation. Changing with the times is progressive; Jane Fonda (who once shared that she wishes she’d been “brave” enough to opt out of cosmetic work) affirms: “Any healthy country, like any healthy individual, should be in perpetual revolution, perpetual change.”

To the extent that we are all always already entrapped in a power system, Gloria Steinem’s eye lift signals a willingness to flex with a culture in transition, but her elective surgery is also a concession based on a limited view of femininity. With so much reworking of the social body still to do, to focus on Gloria Steinem’s cosmetic work is surely a distraction and, as she asserted long ago, a waste of time. ■