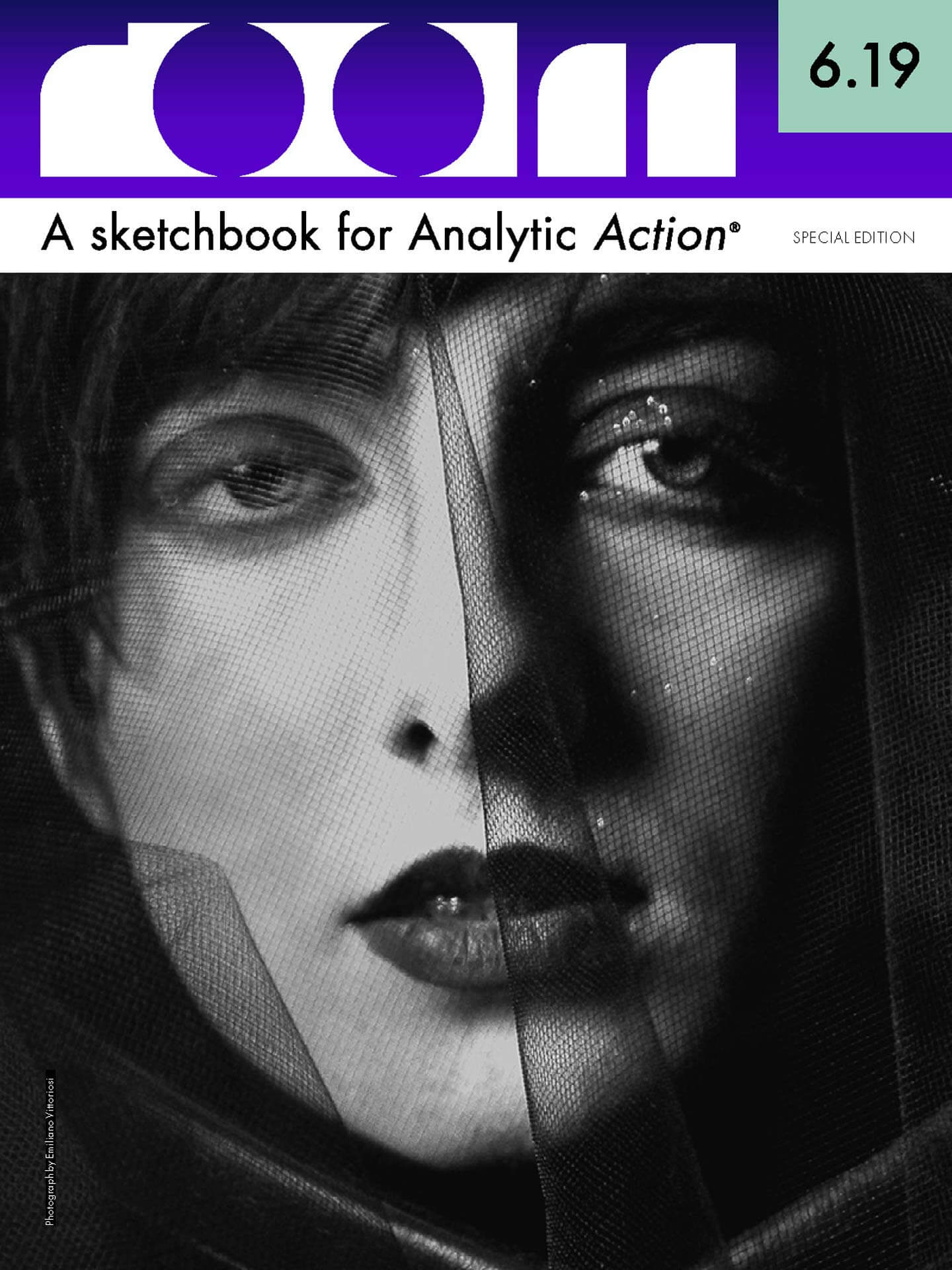 DEMOCRACY AND PSYCHOANALYSIS: MINDING THE GAP

Democracy, psychoanalysis, and Room share a powerful connection. They were created to contain and facilitate the many voices that comprise (and conflict with) our polities, ourselves, and, in the case of Room, the space between ourselves and our societies. This is not coincidental. As Jill Gentile explains in her book Feminine Law: Freud, Free Speech, and the Voice of Desire, there is a resonance between the method of free association underlying the work of psychoanalysis and the right of free speech which is the bedrock of democracy. And how does Room fit in? Right in the middle. Room could not exist outside of a democracy in which free public speech was possible, nor would it exist without the analytic principle of free association that guides its submission process.

Even so, none of us anticipated the power of the essays, poetry, and art which would come to be contained in this issue. Room 6.19 cannot be read lightly. Download it. Go back to it. Go slowly. Each of these authors and artists demand close attention. They are not of one voice. They do not intend to be. But they form as cohesive and inclusive a whole as Room has ever published. And it is no coincidence that the center of this issue involves women.

Room 6.19 is a clarion call to mind the gap that exists between our conscious awareness and our unconscious being-in-the-world. In The Culturing of Psychoanalysis, Karim Dajani reminds us of what Erikson and Freud knew: that it is culture that provides the human infant with a shared system of meaning-making that makes it possible for them to understand and be understood and take their place in civilization. But Dajani goes further and deeper. Culture, he writes, inserts itself into our souls. Culture shows us how to understand, use, and live in our bodies; it is the nucleus around which our bodies and theories and power structures are organized. If psychoanalysis ignores culture’s primordial and constituent role in our theories, our bodies, our states of mind, and our nation-states, we will continue to remain unconsciously subject to the force of its impact.

In his essay Presidential States of Mind: The Metapsychology of Trump’s Tweets, Frank Putnam provides a terrifying statistical analysis of Trump’s tweets over the last two years. The graphs oblige us to see what we have felt: there has been a devolution in the state of mind in the leader of our free world. This is the trajectory typically associated, Putnam tells us, with psychological decompensation and violence. Sheldon Bach, in his essay Friendless in Palm Beach, adds that this particular kind of madness is suggestive of a hurricane with a void; “a fragmented, ahistorical, unprocessed view of the world…[is] dangerous in a politician who wields such power.” “What is taking place is what occurs in any authoritarian regime,” writes Jeri Isaacson in her essay A Family Romance. “The unconscious world of the tyrant dictates the political agenda.” Isaacson’s work takes us straight to the heart of Trump’s mother hatred, as she lays out how the “epic enactment of Trump’s internal object world” has disastrous implications — most especially for women and children.

Citing Winnicott, Jill Gentile writes that misogyny goes hand in hand with authoritarianism and the cult of power. While psychoanalysis and democracy offered liberating safeguards to the perils of being human, both practices have also reiterated the patriarchal culture and absorbed its underlying misogyny. Democracies have enslaved, colonized, and subjugated the other — above all the feminine. In Gentile’s sea-changing essay Vaginal Veritas: Thoughts on Misogyny, Psychoanalysis, and Democracy, she revisits psychoanalysis’s patriarchal origin story and reclaims for psychoanalysis a position of prominence for that which was once too threatening to be named. In #Ustoo, Sigmund, Elizabeth Cutter Evert describes the damage done to a subset of women when theoretical orthodoxy dominates the psychoanalytic space. From a different angle, Baker-Pitts’s edgy essay The Feminist Future is Nonbinary reminds us that the cis-woman’s claim of gender oppression was built on the fight against patriarchy and so arises itself from a binary assumption whose corollary is the so-called matriarch. Baker-Pitts wants to help feminists move beyond a totalizing perspective of women and embrace an intersectional agenda that foregrounds justice for those most oppressed by white supremacy: poor, gay, trans, and gender nonconforming people of color.  This requires a tolerance for anxieties that any of us is bound to encounter when we dig deep within our own race, classed, and gendered complexities and interface with another. In A Lesbian Leans In, Ellen Marakowitz deals with just such cultural anxieties as she lays out how heterosexuality itself can be understood as a cultural “norm” that plays into the gender/political system that is forced upon all women but particularly lesbians.

Aneta Stolnić’s Psychoanalysis and Performance Art: Go Figure describes a feminist shift from the literal, hegemonic, logocentric, hierarchical mode of thinking toward a more open, fluid, networked form of producing and transmitting knowledge that psychoanalysis and performance art share. Nowhere is this perhaps more apparent perhaps than in Freud’s understanding of dream work. In Revisiting A Dream, Joan Golden-Alexis returns to Llama Khouri’s dream (“Buried Neck Deep,” Room 10.18) to illustrate how dreams, once embraced, can provide one way to return from a place of exile, homelessness, rootlessness, and powerlessness, and help reinstate the inalienable rights denied by a corrosive society.

Analysts in Mexico and Venezuela explain how this more “open and fluid way of producing and transmitting knowledge” carried into a larger cultural imagery can also have disastrous effects. Raquel Berman, an analyst practicing in Mexico City who has been studying the problem of feminicide for decades, has come to believe that the cultural, sociological, political, and economic complexities that contribute to the killing of women are linked to the fundamental ideology of machismo. In A Man Who Hates Women, she illustrates, through her seventeen-year analysis, the way a machismo culture takes root in one man’s psyche. In Venezuela: A Psychosocial Perspective, Mireya Lozada describes how the cultural imagery of mythology, religion, and political ideology initially contributed to a magical divination of her motherland before being used, over the course of the last two decades, to kill off the entire country.

Culture and history seep into our souls, but what happens to us when history changes under our feet, or even under the slow feats of generations before ours? The nostalgic pull to have time stand still can collapse into what Vamik Volkan has called petrified grief. Growing up in the American South, Molly Castelloe was acutely aware how an unmetabolized mourning made its way into everyday violence and heartbreak. In Making Vamik’s Room, Molly Castelloe tells us that creating a film of Vamik Volkan’s life and work became a way to discover her own story. Interviewing Vamik Volkan for this issue of Room, Richard Grose realized that “external events and accidents” — the “exigencies of life” in Freud’s words — played a huge part in making him the man he became.

The artists and poets featured in Room 6.19 are using the exigencies of culture and history to reimagine humanity. José Vívenes’s Enough of False Heroes paintings re-present the collective symbols of Venezuelan heroes within a new social imaginary.  Following the US 2016 elections, Rebecca Brown’s  insubordinate, collaborative work, Disordered used “unsanctioned” art in public spaces to resituate mental health in society. Gala Garrido’s art is also unsanctioned and insubordinate. Responding to her personal experience with Venezuelan women convicted of crimes, her Bacchae explores the eruption of the irrational when civilization shifts toward tyranny, when we are “assaulted by unreason and every form of impunity has become normal.” Garrido’s work beckons us back to the horror of Euripides’s tragedy — the outside place of female violence. In her poem Clytemnestra, Sara Taber channels one of history’s most famous female assassin’s unrepentant sensibility with a pathos that brings us to our knees. Francesca Schwartz returns to Room’s online art gallery with City of Women: her meditative and penetrating encounter with how women’s lives are defined by their bodies over time.

“I don’t think my experiences are clarified or made beautiful for myself or anyone else; they are just there in whatever form I can find them,” wrote the poet Frank O’Hara. In Kate Daniels’s magnificent Homage to Frank O’Hara: Fire Island Tea Dance, Summer ’78, Kate, solitary, still, and female, remembers when “old paradigms fell apart, and new images churned to the surface.”

In the field of psychoanalysis and in our democracies, old paradigms are falling apart while new images are churning to the surface. Like democracy, Room is larger than the sum of its parts. Like psychoanalysis, Room opens new territory. Expansive and far-reaching and inclusive: Room 6.19 is a special issue. This one will take some time. ■